For my flash project i intend to make a sort of interactive adventure in which a character will work through the animation with occasional interactive stops which must be completed correctly in order to proceed. For example a duck shoot style part.
When developing the character i started on the head and worked on head and hair styles.
As can be seen in the image i decided a more shaped cheek gave a better image when taking an angled side look, and hair was less boring when spiked upwards on the fringe. 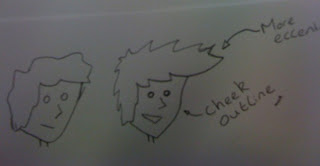 Once i'd worked out a rough headline i tackled the part of the characters head that looked weird... The eyes.

I felt that empty filled eyes were soullessm and rounded eyes on pupils just bored me.
Whereas the straight simple lined eye appealed to me somehow, as i felt it could be manipulated in various ways to show emotion through eye shapes as shown with the front and back examples below. 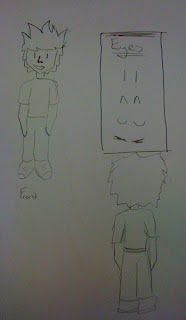 The front and back views would be used in dialogue shots ideally, as i use them to create perspective in the flash movie. 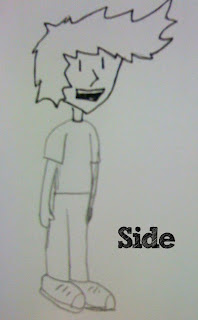 Further to these i considered motions that would be used in a walk or movement. However this just included the arms as i feel the whole body does not necessarily have to appear on the stage! 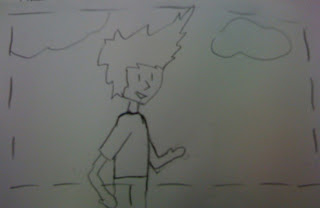 I then developed these further by putting them within the flash environment and drawing them there. 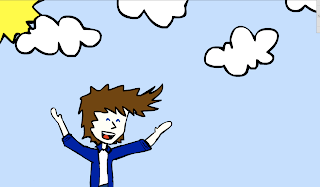 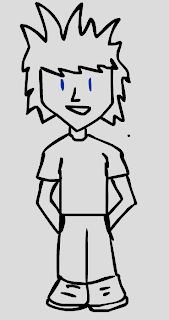 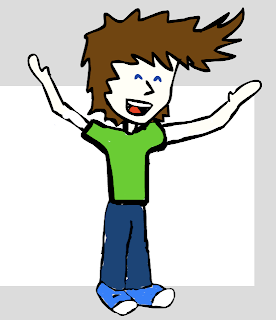 The website design is still progressing. Most elements are ready for dreamweaver for the home page. I just need to throw in a links area. Playing about with where it goes though.. will post some variations next blog post hopefully!!!

The progression here shows the themed titles in which i aimed to keep in the same note book / scrap book paper style which i like. This maintains a consistent theme with the background and cloud focus.
The twitter feed in the right bar is the progression i decided to lead on in place of the blog following feedback that my blog should not be the home pages focus, as its better to just link, so i will be providing a link to it somehow.
Below i added a new section to the original design from October / November which shows the most recent work with one piece of Flash work, one piece of web work and one piece of Video. These being the three areas i want to apply most focus to through my portfolio as they are the areas that interest me most.
The main upper left box will have a short brief introduction to the site explaining that it is my portfolio site and all my work up to date can be found there. Probably throw in a picture or something! Though i wont add too much detail there as i want to have a detailed about me page!
I am also thinking a link to the blog within that box might be wise as it would slip in with my original plans of having the blog there i guess...
Posted by Tom Burns at 12:46 1 comment:

All Rounded vs Semi-Rounded.

As i was working on the new boxes for my new layout and giving them the paper style too i accidentally rounded all of the corners as i went off into my own daydream world for a short time...

I realised and decided i'd keep as a comparison, however i only kept it to the point i'd reached with just the top two being all cornered..

Personally i prefer the semi rounded one which looks as if it was all joined with bits cut out! 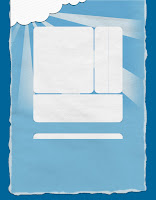 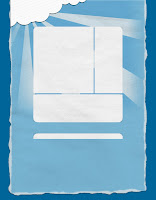 Opinions would be appreciated!
Posted by Tom Burns at 10:18 2 comments: 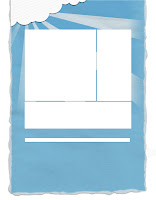 I liked the theme for my portfolio site and wanted to keep it.

However i felt that it was lacking something and looked too plain, with just plain colour on plain colour, and also had the issue with the edges not being able to blend with any web based background colour.

I tackled this by applying a paper effect, something i had always wanted to go with initially, and that i was in a way aiming for when i first put notebook lines on my first cloud. The initial thought i had in doing this was that it would give a bit of a note pad / paper theme subtly.

With my new design i have applied a full paper effect, and created torn paper effects over the edges which i feel will give the portfolio site a bit more life and make it less plain in its design. It also allows me to add the same effect to the central boxes and throughout the site with various features i am going to add as i redesign the site!
Posted by Tom Burns at 01:21 No comments: